Hello and welcome! Todays card is extra special to me because it's inspiration comes from my big fuzzy Bernese Mountain Dog, Angus! I finally bought myself the Bitty Ball Pop-Up from Karen Burniston and let me tell you, I kick myself for not getting it sooner! 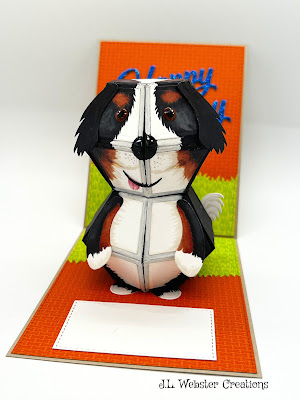 As soon as I seen the how to video on YouTube and Karen Burniston made a dog using the Bitty Ball, I knew I had to make Angus. But a Bernese Mountain Dog isn't just one solid color. They are black, tan and white in different areas of their bodies, so I got out my Copic markers to help me out.
First step was to cut out 4 black pieces to make two bitty balls. From there I needed to plan out where his face was going to go. I cut out four trapezoids and one hexagon using the dies in the set and 110lb white cardstock. I glued these on to the head of my dog. Then with a pencil, I lightly sketched out where the white stripe on his head runs down to his face and nose. He has a bit of tan on his face, around his mouth so I sketched that out as well. Then with a black Copic marker, I began filling in with the colors I needed.
I die cut the four pie shaped pieces to make the nose out of black cardstock and I cut the eyes out of white cardstock and colored them brown with Copic markers. I die cut the arms and feet out of white cardstock and added black and tan fur to the arms and 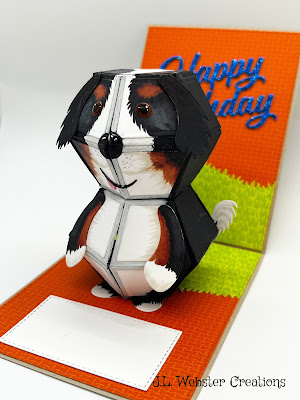 black fur to the feet. For the tail I die cut two pieces, one black and one white. Bernese Mountain Dogs have long haired tails that kind of look like a fan. So I added a white end to the black tail and with my scissors added little cuts to look like fur.

I die cut out two pieces with black cardstock to make the ears and with my scissors added little snips to make the ends of the ears look like hair.

I used white paint and carefully painted between the trapezoids where the black cardstock shows through so that his face looks solid white.

I added glossy accents to the eyes and nose, then once that was dry I added white highlights with a white Gel Pen. I die cut out the mouth with black cardstock and using the smaller oval, cut out a pink tongue. I had to trim it down to fit the mouth.

I cut an A2 card base using Kraft cardstock from My Favorite Things. I had a small 6x6 paper pack from Doodlebug Designs called Puppy Love and used the orange cardstock with little dog bones on it for the background paper. I used a piece from the same pack with had grass on it and cut that out using the MFT Slimline Grassy Hills Die-namics. I added the Happy Birthday sentiment from Karen Burniston using a glitter blue cardstock.

I have to say, I am super proud with how this little guy turned out. I hope you find him as super cute as I do. Thank you so much for stopping by and Happy Crafting!

Hello and Welcome to a very special post! Todays card showcases my very first Karen Burniston Designer Challenge: Labels! For this card I u... 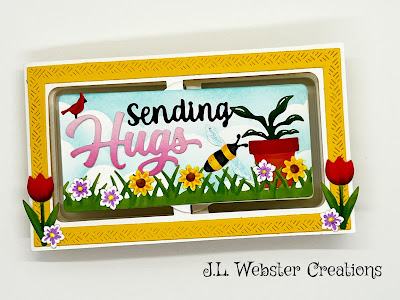